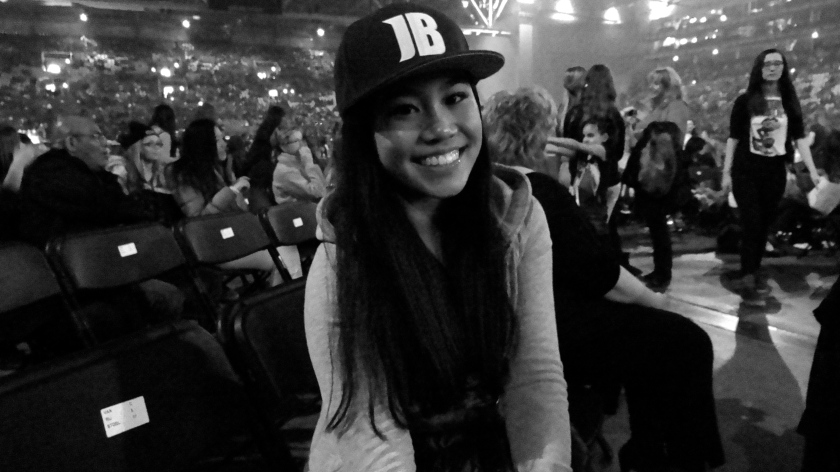 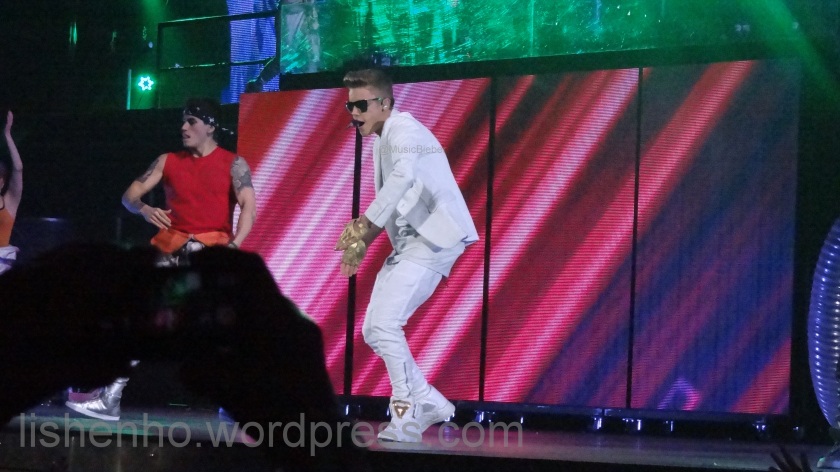 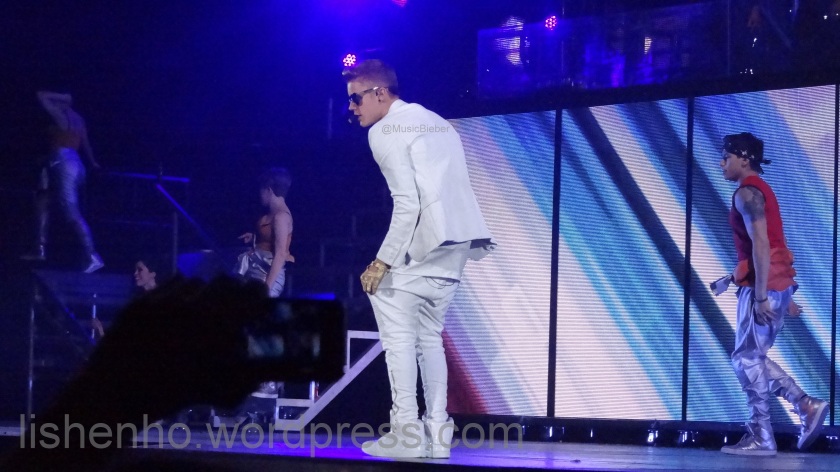 Everyone was holding this paper above their head, whilst Justin performed ‘Believe’

Many people took photos before the concert started

The lovely girls, to who I sold my 2 spare tickets 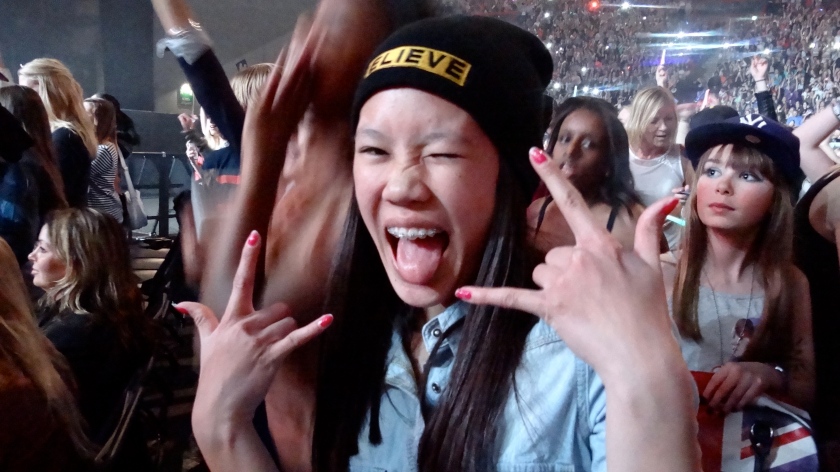 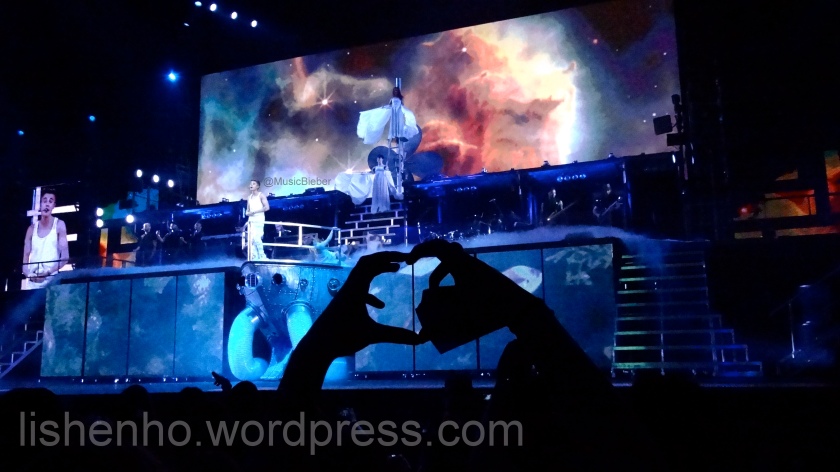 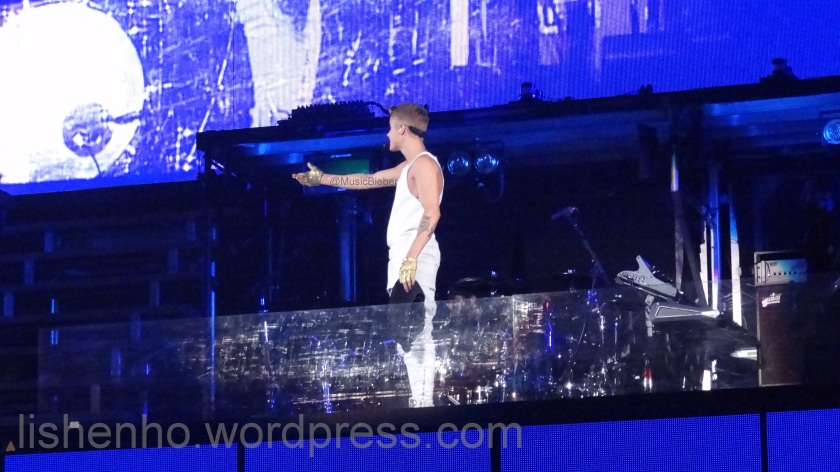 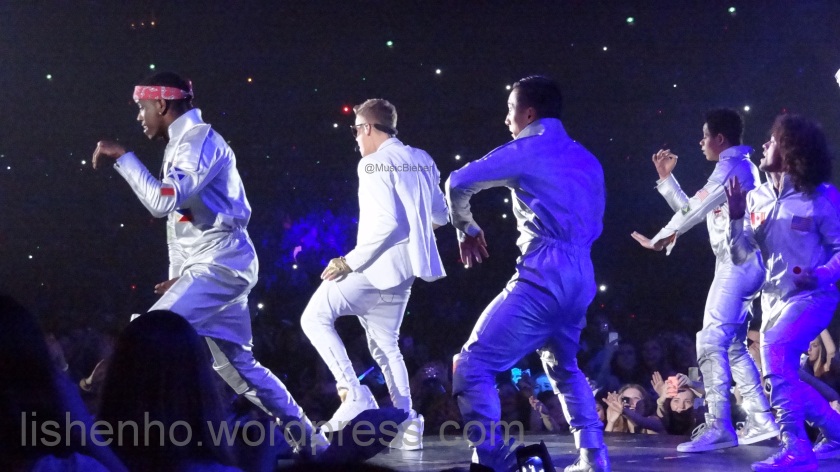 Alright, so I guess I’ll just start from the beginning? So I finally arrived in Arnhem and the feelings in my tummy were simply overwhelming me. I felt super happy and excited and wanted to scream loudly and yeah, my parents thought I was driving crazy. Anyways, I noticed not very many people, until I found out that the area filled with believers was huge! They were all around the building, which was gigantic! The beliebers there weren’t all from The Netherlands, as I also saw people from Belgium, Germany and even a huge crowd of Swiss beliebers! My younger sister, who was with me, looked around and a merchandise shop caught her eye, so we went over to take a look. I ended up buying a T-shirt with all the tour dates on the backside of it, just like I bought 2 years ago. My sisters bought a beanie with the text ‘Believe’ on it, that I wanted to have super badly as well. Unfortunately, I didn’t bring enough money with me to buy both of them.. Too bad. The crowd of beliebers became bigger and bigger the nearer the concert came. I saw super dedicated beliebers, who wore everything purple and wrote down texts on their arms and pretty much everything else you could imagine, but also some people who just came so they could say they’d seen Justin in real. Well, that’s what they looked like, I didn’t talk with them or anything. I then, finally, met Sita, Fabienne and Lizzy, with who I’d talked to for so long on twitter! I felt very nervous, but also very happy to meet them. After that, I spend very much time eating, talking and taking photos with my sister haha
There was a countdown, starting at 10 minutes. Everyone was screaming and freaking out. When Justin came on stage, or actually flew on stage to be more specific, the crowd couldn’t handle itself anymore, including me. All I thought was ‘SCREW YOU, IMMA RUN TOWARDS HIM!’. So, even though I had 5th row tickets, I ran to the centre and ended up standing on a chair on row 2, whilst jumping, screaming and bawling my eyes out. Yes, I’ve just confessed it. I cried at the concert. I usually never cry out of happiness, but this was just different from all the other moments in my life. I guess the emotions just took control? Everything was overwhelming me and I realised that this might be the last time for me to see him in real, this close.. I took so many photos and filmed so much! I’m thinking about making a little video of it, but I’m not sure yet, since of the lack of time I already have in life.. Of course I’m not 100% sure, but I really think I had eye-contact with him, as well as with some of his dancers,  I’d never in my life, screamed as loudly as I did yesterday. It surprised me that I didn’t lose my voice because of this! Long story cut short, it was the most amazing day of my entire life, not even exaggerating.
It pisses me off that the media talks so cruelly about him. Yes, he were an hour too late, but so what?! The concert was flawless, just like Justin was. He came too late, because of the Meet & Greets, not because he was playing games or anything else the media writes about. I honestly think that the people who complained about the show, are such pricks. I don’t care whether he’d play backed the show or sung in real life. I’d totally understand him, if it turned out he didn’t sing everything live. I mean, nobody would be able to sing as much as he does in such a short time! Not even mentioning that he dances a lot!
Gosh, he looked perfect there on stage and I was within 10 meters away from him!
I’ll never forget this day..

p.s. I watermarked all my photos because I’ve had bad experience with people claiming they took or own my photos. If you want the original one, just email me or leave a comment below (: photos I took before the concert will be published later this week

8 thoughts on “WHEN I SAY JUSTIN, Y’ALL SAY BIEBER!”